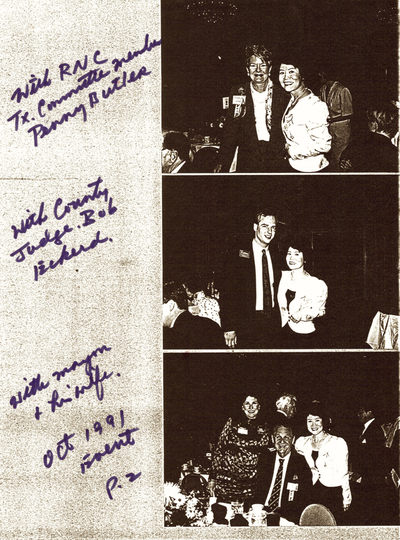 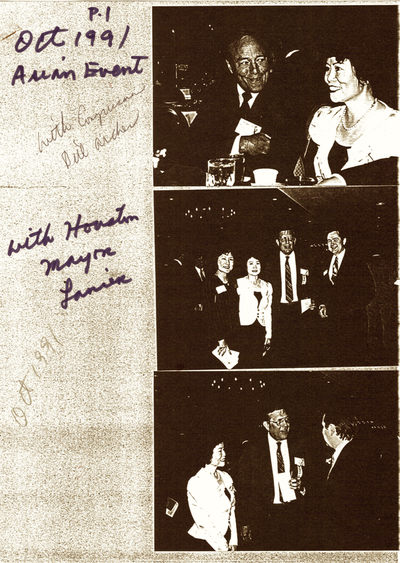 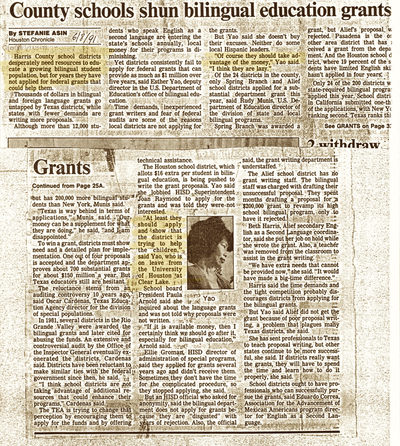 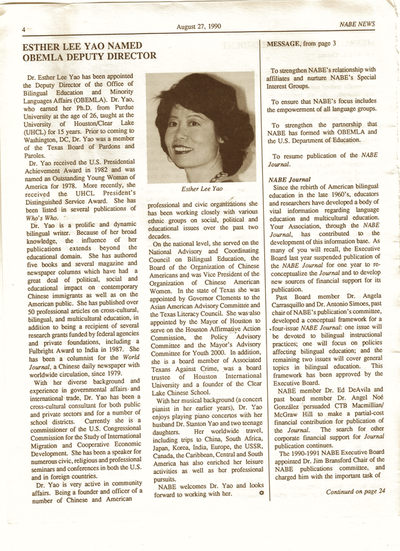 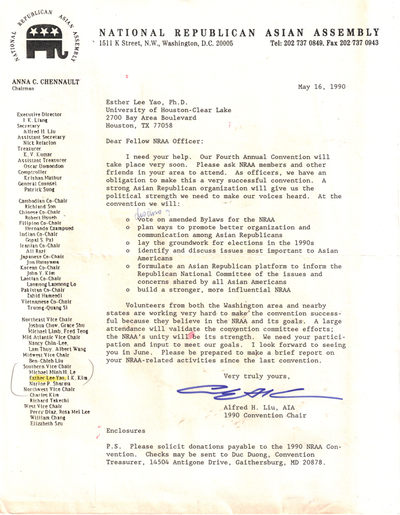 ​Political appointments usually are “rewards” for people’s “contribution” - either through influence or financial donations to certain campaigns. The ranks of appointments are highly correlated to the level of one’s “contribution.” It’s a very simple and practical reality. Dr. Esther S. Lee fully understood the “games”, but she guarded her Christian principles as much as possible during her entire political involvement.

As mentioned in the file/section of GOP 1988, Dr. Esther S. Lee supported Senator Bob Dole for reasons based on her core values, during the GOP primary in Texas. She fully understood that it was an uphill battle for Senator Dole to defeat VP Bush in Texas.  Politically speaking, Dr. Lee knew that her decision was not beneficial for a political appointment under VP Bush’s administration if he were elected.

There were two reasons for Esther’s decision to support Senator Dole in the 1988 Texas primary. First, Senator Dole recognized the contributions of Asian Americans in the US at multiple occasions. He was more accessible to Asian Americans via various functions and public statements. The second reason was that without knowing Esther personally and without her financial contribution, he appointed her to serve on a high ranking and important Congressional Commission for the Study of International Migration and Cooperative Economic Development, 1987-1990, as mandated by the Immigration Reform and Control Act of 1986. Obviously, he recognized the strength and contribution of Asian Americans in the great nation and valued Dr. Lee’s service of GOP and in the Asian American community. Most likely, he trusted Dr. Lee’s professional expertise and political achievements. Thus, Esther decided to support Senator Dole in the Texas primary.

Since the new immigrants from Asia were still green for American politics and not ready for setbacks or failures in their initial political participation, Dr. Lee encouraged them to support VP Bush in Texas under the leadership of Helen and James Chang. She worked hard to recruit other non-Asians to support Senator Dole, including Mr. Albert Gonzales, who later became US Attorney General under President Bush 43rd.

Traditionally, after party primaries, all party primary candidates would unite to defeat the opposition party candidates in November.  Thus, after Senator Dole’s loss/defeat in Texas primary, it was natural for Esther to support VP Bush for his November campaign against Democrat Massachusetts Governor Michael Dukakis. As expected, Esther worked very hard for VP Bush’s victory in November to succeed President Ronald Reagan in 1988.

Fully knowing that seeking a political appointment would not be easy, Esther did not expect too much but still pursued it.  In addition to the fact that she did not support VP Bush in the primary, her photo taken during her congressional commission’s visit to Nicaragua also raised a red flag in the White House. Like other visits with the heads of states in Central America, the congressional delegate also met with President Daniel Ortega, then the dictator of Nicaragua. Unfortunately, Esther’s photo with President Ortega created serious concerns of the White House.  Even though the situation was explained by the chairman of the Commission, the damage was done. As a result, Esther accepted a less preferred appointment as the Deputy Director of OBEMLA Office, US Department of Education in June 1990. 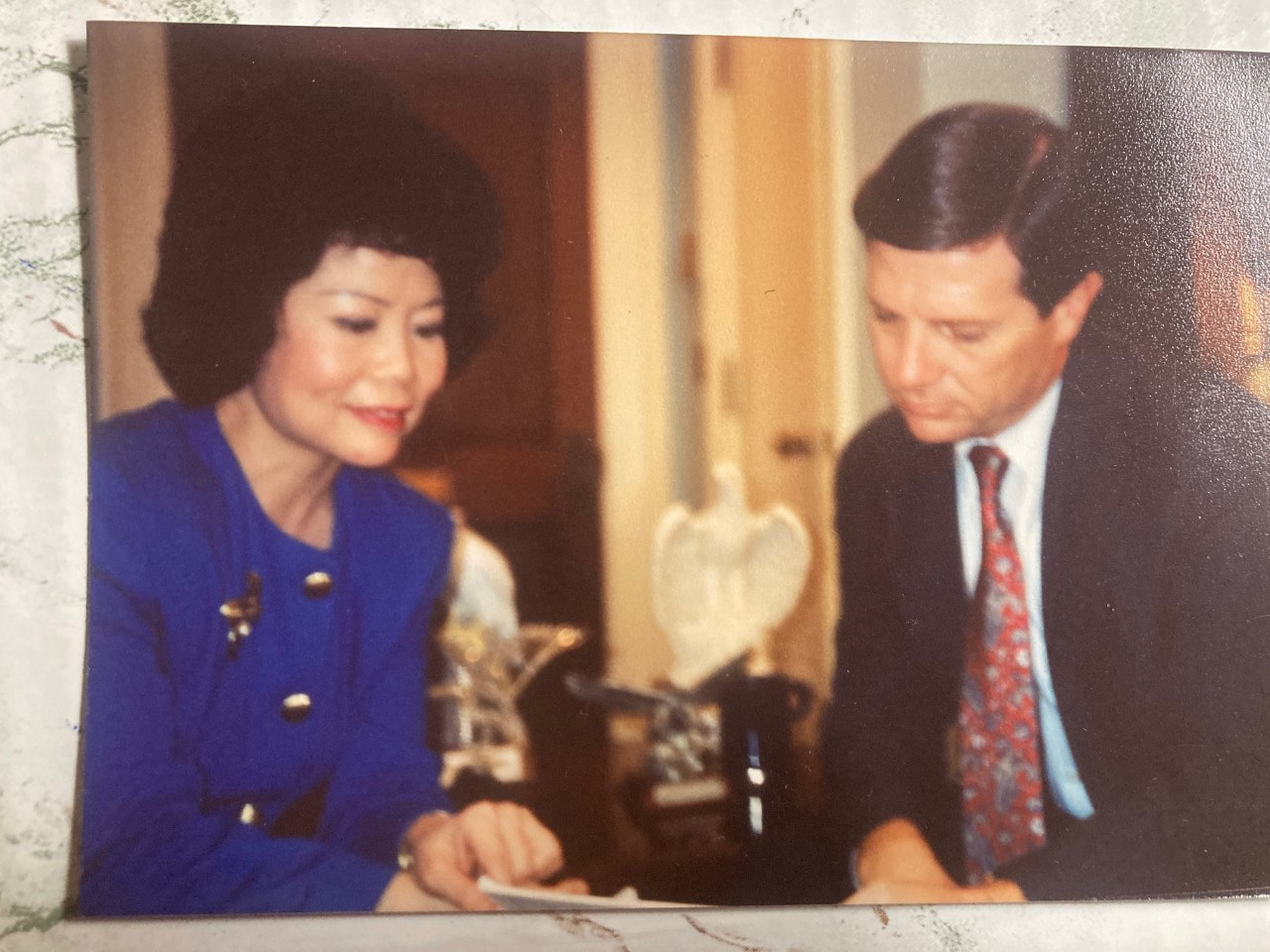 Visiting GOP minority leader, congressman Tom DeLay to discuss educational issues while her appointment with Dept. of ED in 1991.